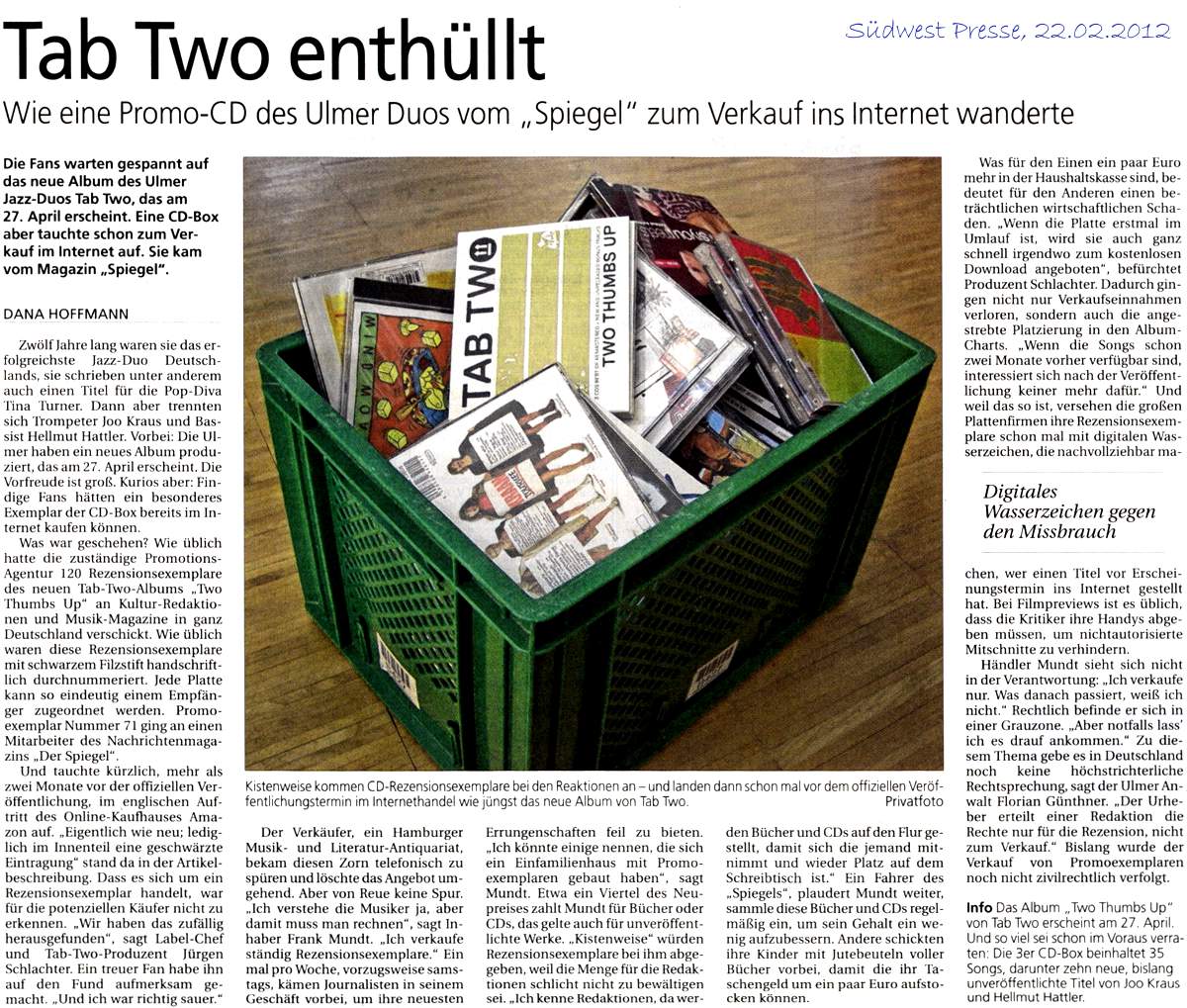 The fans are eagerly awaiting the new album of the German jazz duo TAB TWO. It will be released on 27 April. But one CD box already appeared for sale on the Internet. It came from the renowned news magazine Der Spiegel.

For twelve years, they were the most successful jazz duo of Germany. They wrote among other things also a song for the pop diva Tina Turner. But then trumpeter Joo Kraus and bassist Hellmut Hattler separated. Now this is past: They have produced a new album, which will be released on 27 April. The anticipation is great. Strange, however: Clever fans could have purchased a special copy of the CD box on the Internet already.

What had happened? As usual, the responsible promotion agency had sent 120 review copies of the new TAB TWO album Two Thumbs Up to editors of culture and music magazines all over Germany. As usual, this review copies were numbered by hand with a black marker. Each album can thus be clearly associated with a receiver. Promo copy number 71 went to an employee of the news magazine Der Spiegel.

And recently it appeared on the British platform of the online shop Amazon – more than two months before its official release. Actually like new, only a blackened entry inside stood in the item description. For potential buyers it was not to recognize that this is a review copy. We found out by chance, says label boss and TAB TWO producer Juergen Schlachter. A loyal fan made him aware of the find. And I was really pissed.

The seller, a second-hand shop for music and literature based in Hamburg, got to feel this anger by phone, and put out the offer immediately. But no trace of remorse. I understand the musicians. But one must reckon on that, says owner Frank Mundt. I constantly sell review copies. Once a week, preferably on Saturdays, journalists would come by in his shop in order to offer their latest achievements for sale. I could name some who have built a house with promo copies, says Mundt. Mundt pays about a quarter of the price for books or CDs, this applies to unpublished works, too. Review copies would be handed over to him by the box, because the editors could simply not cope with the amount. I know editors, where books and CDs are placed in the hallway, so that someone takes them with him, for having enough space on the desk again. A driver of Der Spiegel, Mundt chats, collects these books and CDs on a regular basis to supplement his salary a bit. Others sent their children over with jute bags full of books so that they can increase their pocket money to a few bucks.

For the one this are a few bucks more for the household budget. But for the other it means a significant economic damage. Once the album is in circulation, it will take only a short time till it is availabel somewere for free download, producer Schlachter fears. Thus not only sales revenue were lost, but also the intended placement in the album charts. If the songs are already available two months in advance, no one will be interested after the publication. And because of this, the big record companies provide their review copies with digital watermarks that make it possible to track who has put a song on the Internet before publication. In film previews, it is common that the critics have to hand off their cell phones, in order to prevent unauthorized recordings.

Dealer Mundt does not regard himself as responsible: I sell only. I don’t know what happens after that. Legally, he is in a grey area. But if necessary I’ll chance it. On this subject, there is still no court case law in Germany, says lawyer Florian Guenthner. The author grants an editor the rights only for a review, not for sale. So far, the sale of promotional copies was not subject to civil liability.

Information: The album Two Thumbs Up by TAB TWO is going to be released on 27 April. And as much can be revealed in advance: The 3-CD box set includes 35 songs, including ten new, previously unreleased tracks by Joo Kraus and Hellmut Hattler.

Additional stories on Facebook (mostly in German):
Main thread of the discussion
Article in Stuttgarter Nachrichten